Selection on height in Europe

Height is the canonical quantitative trait in humans. It’s easy to measure and has a high heritability (around 0.8 - see references in Visscher et al 20081). Interestingly, it varies significantly across populations, even on a sub-continental level. Recently, there have been a number of interesting papers about this observation and the extent to which it’s driven by selection. Briefly:

Based on my own work, I think that there are at least two independent episodes of selection in European history, and present-day height variation largely corresponds to variation in ancestry.

###The distribution of height Ignoring the subtleties of measurement, average male height in present-day Europe is around 178cm (5’10”) with a standard deviation2 of 7cm, while average female height is around 15cm lower. Between-country differences in average height are up to 15cm, or around 2sd (Wikipedia, Grasgruber et al. 2014). You can see that there’s a rough North-South gradient, with Northern Europeans generally taller than Southern Europeans, but it’s not perfect.

###Genetic basis for variation in height At least some of this between-population variation in height has a genetic basis, though it’s not clear exactly how much. For example, looking at GWAS hits, height-increasing alleles are more common in Northern Europe, and height-decreasing alleles more common in Southern Europe (Turchin et al 2012). Another argument for a strong genetic effect is that despite an overall increase in absolute height over the past 100 years, the relative heights of European countries have remained relatively constant (Graham Coop). Robinson et al. (2015) get at this question by estimating that 9-41% of the variance in predicted genetic height can be accounted for by between-population factors, but it’s not clear to me how this would translate to a proportion of the total genetic effect. Ultimately I feel like estimating this number exactly would be murky and not particularly interesting.

###Selection on height Turchin et al. (2012) showed that the extent of differentiation of height-affecting alleles is greater than can reasonably be explained by neutral processes, an observation confirmed by Berg & Coop (2014) and Robinson et al (2015). Systematic investigation is limited by sampling, but one interesting observation is that this effect seems to be particularly strong in Sardinia (Zoledziewska et al. 2015). In Mathieson et al. (2015), we tried to look at the changes in genetic height over time using ancient samples and found evidence for two independent signs for selection - one for decreased height in Neolithic Iberia, and one for increased height in Bronze Age Steppe populations. 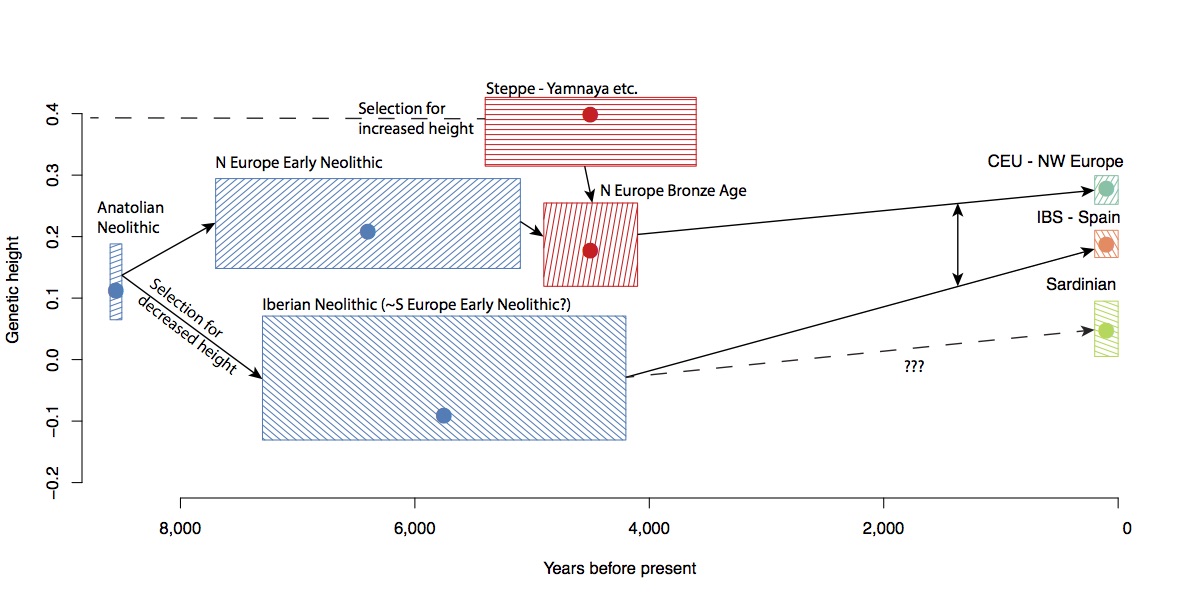 This is a modified version of a figure from our paper, showing estimated genetic height in various ancient populations with arrows representing major population relationships. It’s clear that Neolithic Iberians had substantially lower genetic height than Northern Europeans (mostly from present-day Germany in this case). I assume, though this needs to be tested, that this represents a generally southern European, rather than specifically Iberian, effect. So my current model is one where the present-day variation in height is driven by variation in the proportions of both Steppe and Southern European Neolithic ancestry. Of course, this model doesn’t exclude additional or ongoing selection, or extra sources of ancestry.

Sardinians provide at least one datapoint consistent with this model because (unlike IBS, say) they have little or no Steppe ancestry, and their genetic height, like their genome-wide ancestry, is consistent with being derived almost entirely from a Southern Early Neolithic (i.e. farmer) population. This is genetic height, which won’t necessarily behave like actual height, but one general prediction of this model is that average height across European countries should increase as the proportion of Yamnaya ancestry increases, which seems to be the case (height data mostly from Grasgruber et al. 2014 and Arcaleni et al. 2006; data; code). 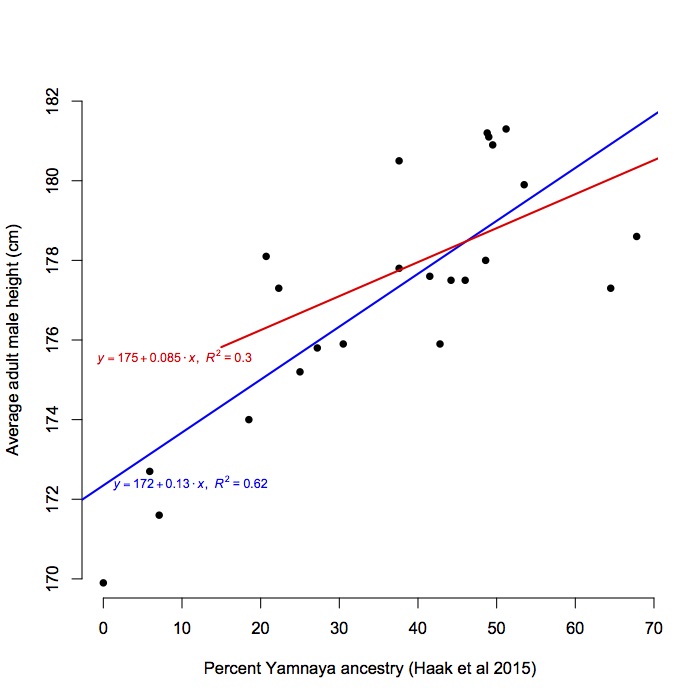 A linear model fits with R2=0.6 and implies that each percent of Yamnaya ancestry adds 1.3mm of height (p=9e-6). The three points in the bottom left are Sardinia, Sicily and Malta3, which are probably not independent, but even removing these points we get a positive trend R2=0.3, p=0.01. Yamnaya ancestry is highly (0.9) correlated with latitude, but a linear model of Height~Latitude fits worse than Height~Yamnaya (R2=0.49 vs 0.6). I think at present we can’t reliably tell the difference between Northern and Southern Early farmer ancestry but there’s a similar prediction that populations with more Northern Farmer ancestry would be talled.

It would be interesting to look at the heights of ancient populations in this context, although estimating heights from skeletal remains probably makes it a bit noisier. Anecdotally though, I’ve heard that the Yamnaya are talled than other Bronze age populations.

###Discussion All this is fairly preliminary, and there are still a number of problems and open questions. For example:

More generally, it seems strange that height is the only trait for which a robust signal of polygenic selection has been observed. It’s hard to imagine that traits like diabetes risk and lipid levels were not also under selection in this period. I think it’s mostly down to lack of power in the predictors for other traits. Possibly larger GWAS and better predictors will reveal more. Finally, most of the work in this area has focussed on Europe, since that’s where the large cohorts are. But similar dynamics must also have happened in the rest of the world and it’s only by looking at other populations that we’ll be able to understand more generally the process of human adaptation.

Arcaleni Secular trend and regional differences in the stature of Italians, 1854–1980 2006

Grasgruber et al. The role of nutrition and genetics as key determinants of the positive height trend 2014